If there’s one area that consistently stands out in the design field, it is poster design, though more specifically, gig poster design. Over the years, revolutionary designers and artists have graced us with stunning concert posters that not only communicate key information such as who, what, where and when, but also visually encapsulate the sound, tone and overall vibe of a band, artist or musician.

To give you an idea of how music posters work to evoke feeling, we’ve put together a few stunning examples that we just can’t get enough of!

Design studio La Boca created a series of stunning limited edition posters for every city on Adele’s European tour. Each night, 200 of these posters were released and secretly signed by Adele herself, including this one promoting her Antwerp gig. It’s no wonder these posters were so sought after; even without Adele’s signature, they are works of art, mixing modern geometric print with a classic, timeless twist; an accolade to the style and feel of Adele’s music, perhaps. 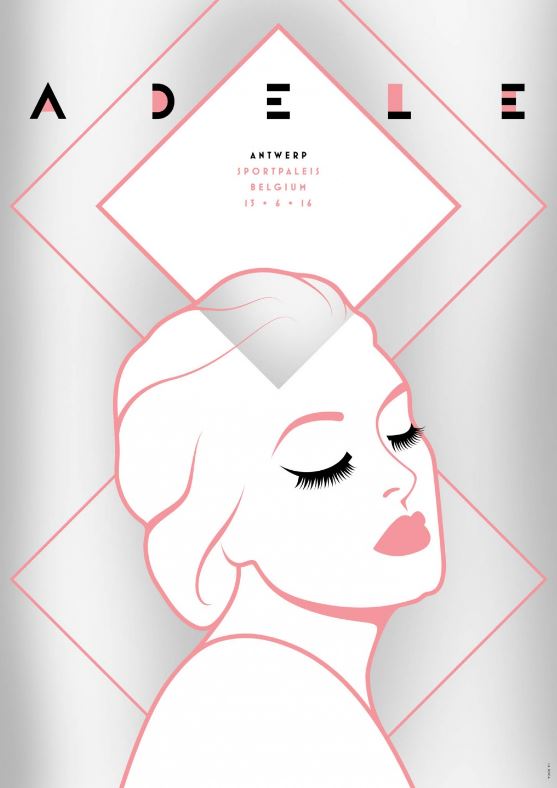 To promote an Arcade Fire gig in New York, this poster by Burlesque of North America turns to the city for inspiration. The result is a blast of colour, texture and energy, serving up an exciting taste of what to expect at the gig. 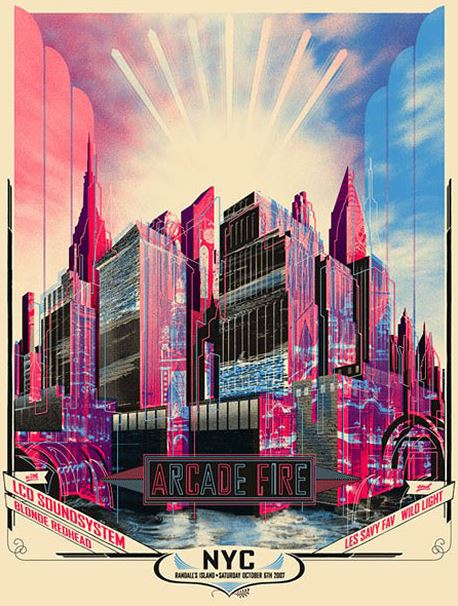 Another gig poster that takes inspiration from the city it is taking place in, the poster for this London based Arctic Monkeys show is a beautiful blend of dark moody tones and striking imagery, with incredible attention to detail. 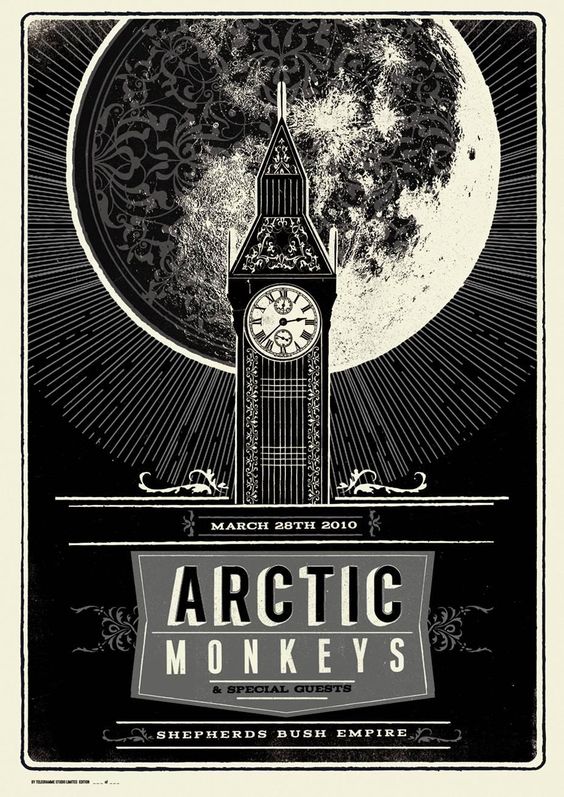 We love the illustrated geometric shapes in this poster for Bat For Lashes. Designed by Telegramme studio, it uses symmetry and stunning typography to create a visual that’s strikingly unique. 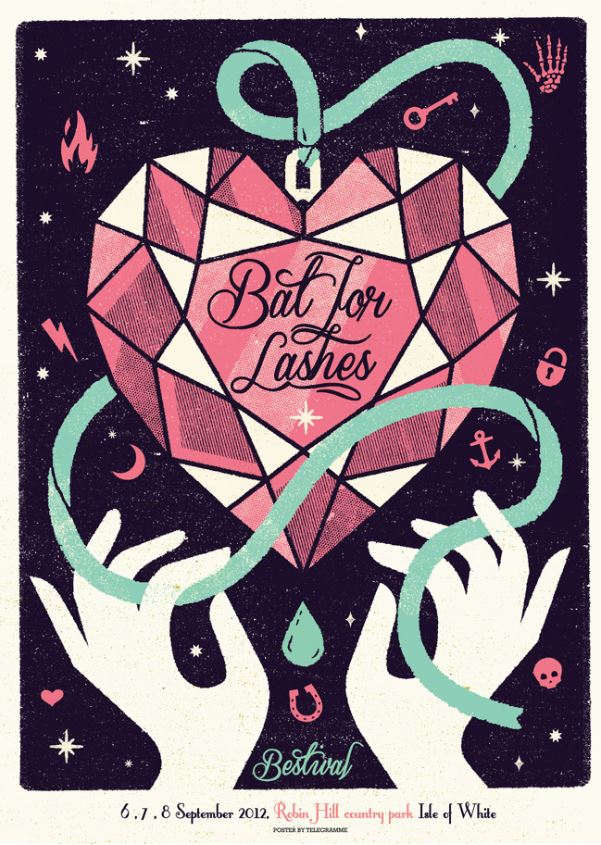 With great typography, block colour and impressive textures, this Black Keys gig poster does a top job of catching the eye. We especially enjoy how it cleverly incorporates the need-to-know details into the design, in such a way that you almost have to look for it. 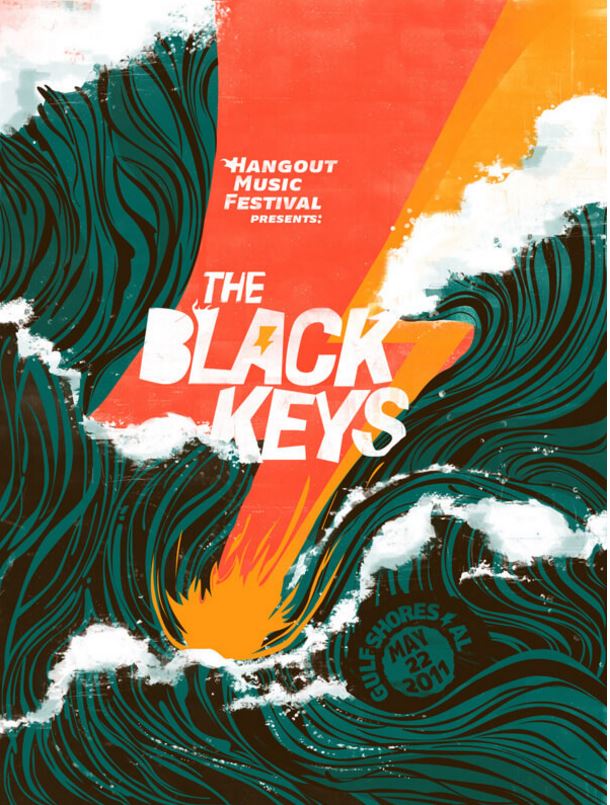 Who says gig posters have to be busy? This poster for indie band Cold War Kids brilliantly uses white space and minimal colour to ensure your attention is focused solely on the band name and illustration. 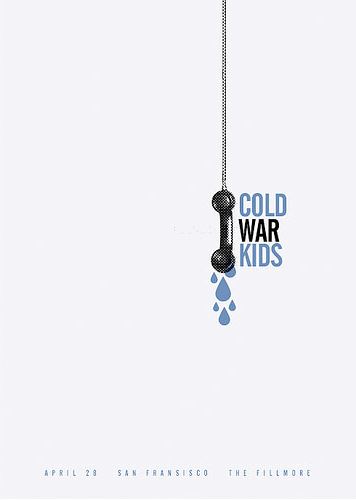 Edward Sharpe and the Magnetic Zeros

Have you spotted the optical illusion in this poster for Edward Sharpe and the Magnetic Zeros? We just can’t get enough of the intricate details; the shading, the texture, the typography, the curved lines and jagged angles...  it certainly makes you look twice! 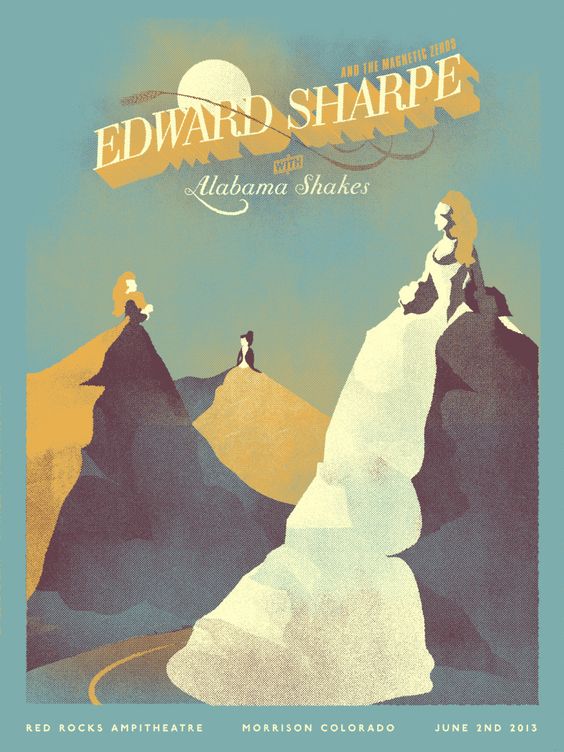 Flight of the Conchords

This poster is the perfect representation of comedy-folk duo Flight of the Conchords. A fusion of bright colours and creative typography, it uses musical icons and boxy shapes to produce a quirky, arcade-game-like feel. 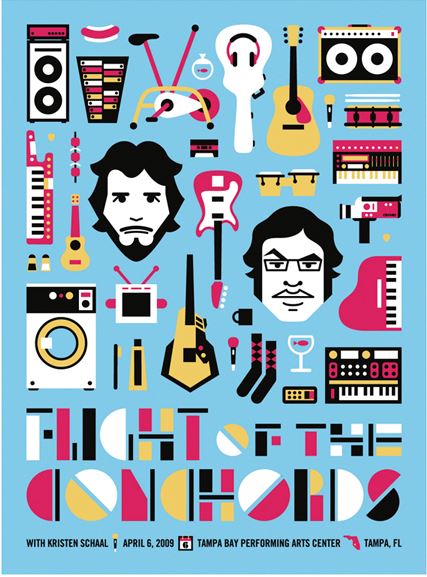 Florence and the Machine

This incredible poster for Florence and the Machine looks like it was taken straight out of a classic adventure novel. With jaw-dropping imagery, sweeping curves and strong colours, it works to draw your eye line across to the text, much like an epic tale storming towards its conclusion. 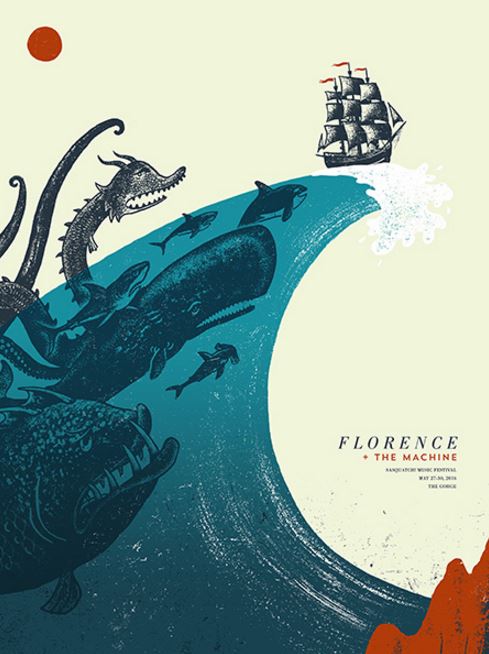 Eric Nyffeler of design studio Doe Eyed created this poster alongside Gotye’s Wally De Backer. He says of the process: ‘We decided to create an image that was clean, stark and vintage, just like his music. I constructed the landscape completely out of triangles, a reference to the triangles on his Making Mirrors album cover. The icing on the cake was making the sun double as the o in the band name, perfectly combining the typography with the illustration.’ (Creative Anarchy: How to Break the Rules of Graphic Design for Creative Success) 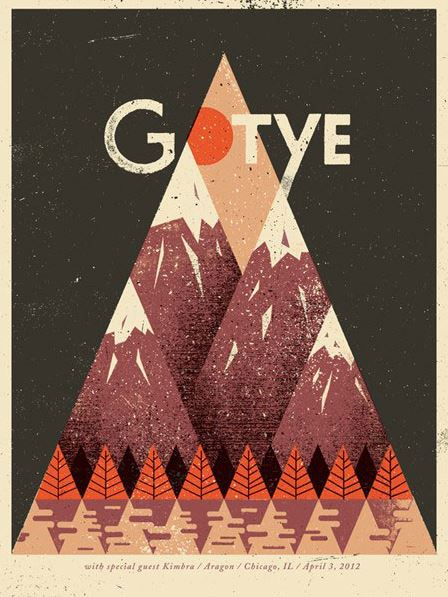 This Iron and Wine poster is a real visual treat, using complex detail to create layers and depth. The lion image that dominates the poster is made up of flower illustrations, perhaps to reflect the beauty and iron will of a lion. If you look carefully, you’ll notice that the lion’s nose, mouth and eyebrows comprise the shape of a wine glass – a nod to the band name. The entire illustration then filters down towards the text and ‘leaks’ into it to form the ‘&’ in header. 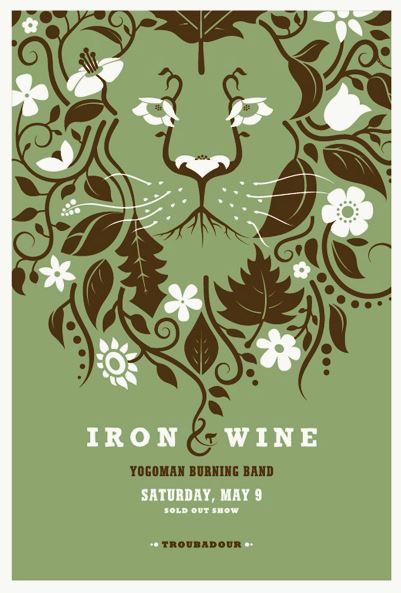 Using a faded hand-drawn effect and retro illustrations, the poster for indie band Low oozes style. The symmetry makes it pleasing to the eye while the bird’s beak points down, drawing your attention to the text. 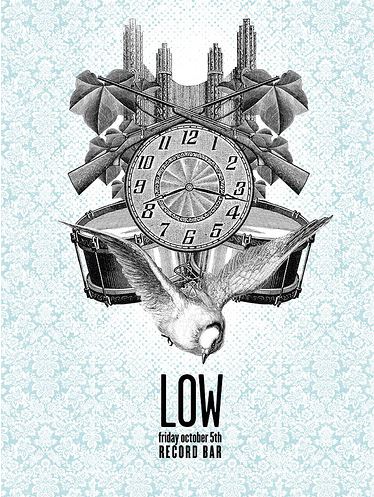 Don’t know about you, but this poster promoting a Lumineers gig gives us a feeling of warmth and relaxation. The use of dark tones offset by the glow of white and yellow is very atmospheric, giving you the expectation that the gig will be a wonderfully laid back experience. 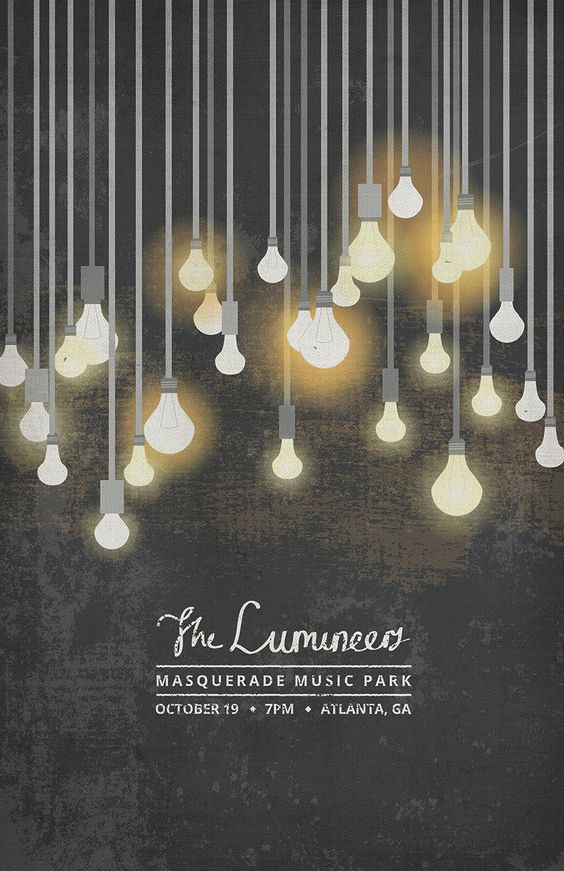 Heavy metal band Mastodon are well known for their incredibly visual gig posters and this one is no exception. Designed by Kyle Sauter, it uses block colour, speckled texture and strange, creative imagery to ensure all eyes are firmly on it! 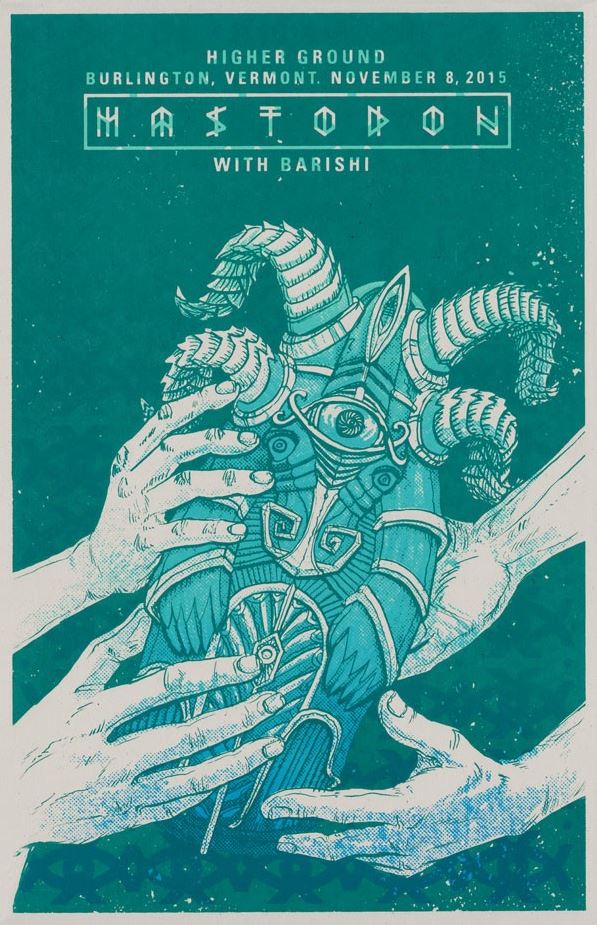 For their North American ‘Full English’ tour with Bear’s Den and The Vaccines, Mumford and Sons’ poster design took things back to their British roots. We particularly love the use of the big red double decker, even if it is giving us ‘Summer Holiday’ vibes! We just hope they ditched the standard luxury tour bus and opted for rocking up in this instead! 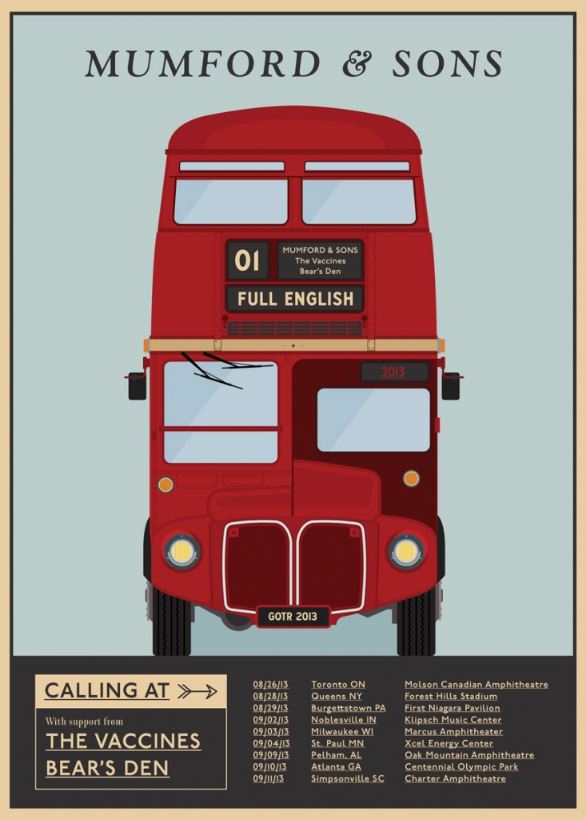 LA artist Kii Arens has somehow managed to create a poster that fuses cool British style with an artistic French twist, which is ideal for something that’s promoting a French show for Sheffield band Pulp! The Jarvis Cocker illustration is fantastically flamboyant and is complimented perfectly by the bold, striking colour palette. 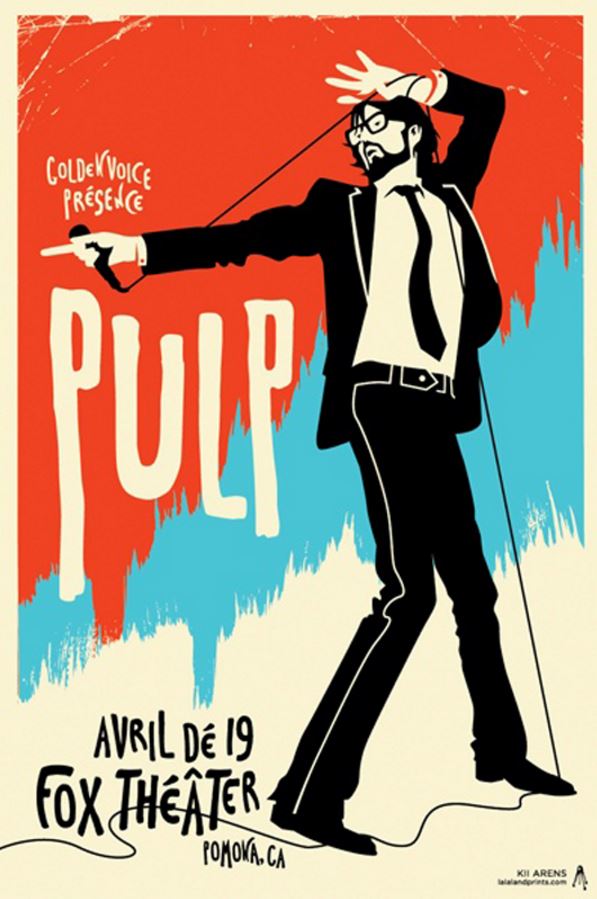 Designed by California based Jason Munn AKA The Small Stakes, this poster for Zooey Deschanel and M Ward’s folksy She and Him is a clever homage to the charming simplicity of a vinyl record. It’s also a nod to She and Him’s music, which takes its influence from 60’s folk, sunshine pop, doo-wop and rock and roll. 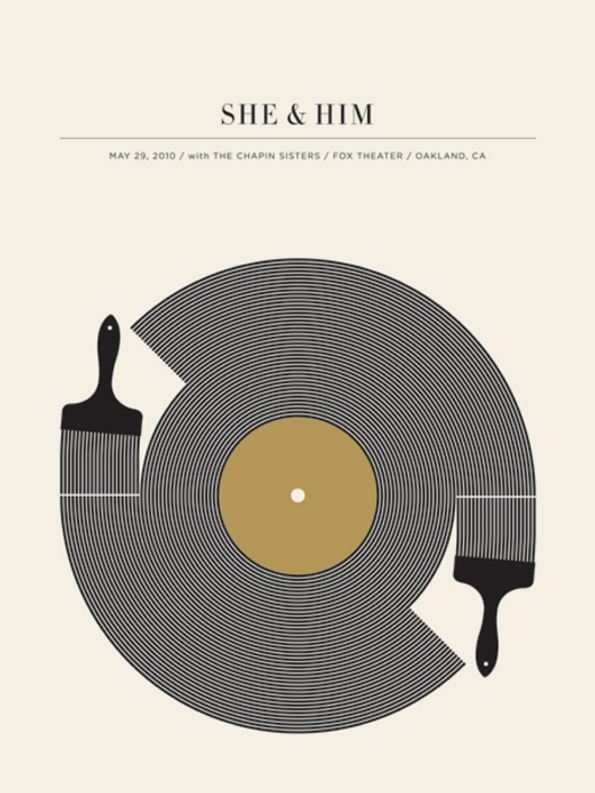 The first thought that comes to mind when we look at this poster for Vampire Weekend is how much it looks like a film poster. It seems to tell a story, although the story may not be as happy as it first seems. When you look closely, you’ll see that the figure’s shadow looks as though it’s turning to ash, much like a vampire burning in the sun (a subtle reference to the band’s name perhaps?). All of a sudden, a bright poster with a seemingly sunny disposition has dark, foreboding undertones, making it instantly more intriguing. 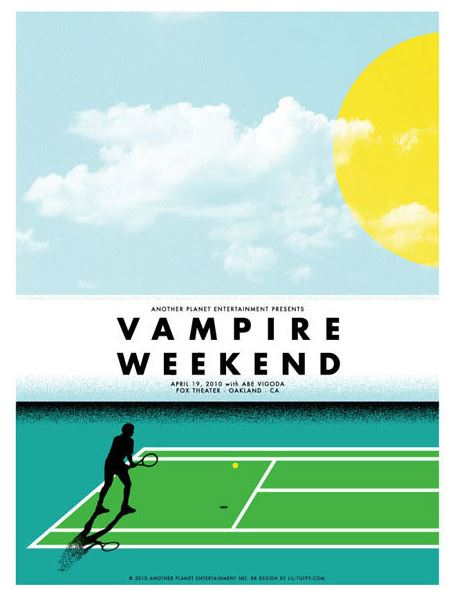 In stark contrast, this second Vampire Weekend poster serves up the dark tones instantly. This time though they’re a thing of beauty, thanks to the twisting flower illustrations and blue and red hues. What’s particularly interesting about this poster is the way the designer has displayed the gig dates. Simple, but incredibly effective. 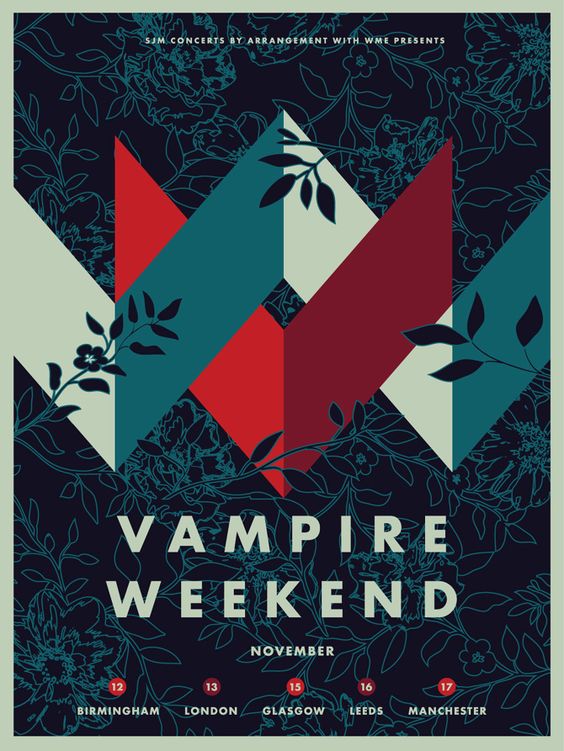 The final poster on our list uses shape-infused illustration and negative space to create a stunning night-time landscape. We love how it depicts a feeling of calm and unity and pulls your eyes towards the text by filtering the imagery down right side of the page, making it brilliantly unique. 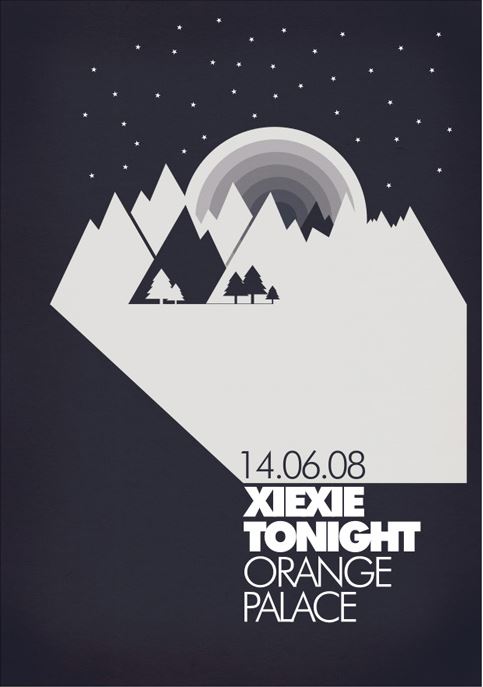 Of course, these posters are just a small portion of the incredible gig artwork that exists. Keep an eye out for gig posters in your local area, more often than not they’re great source of inspiration. 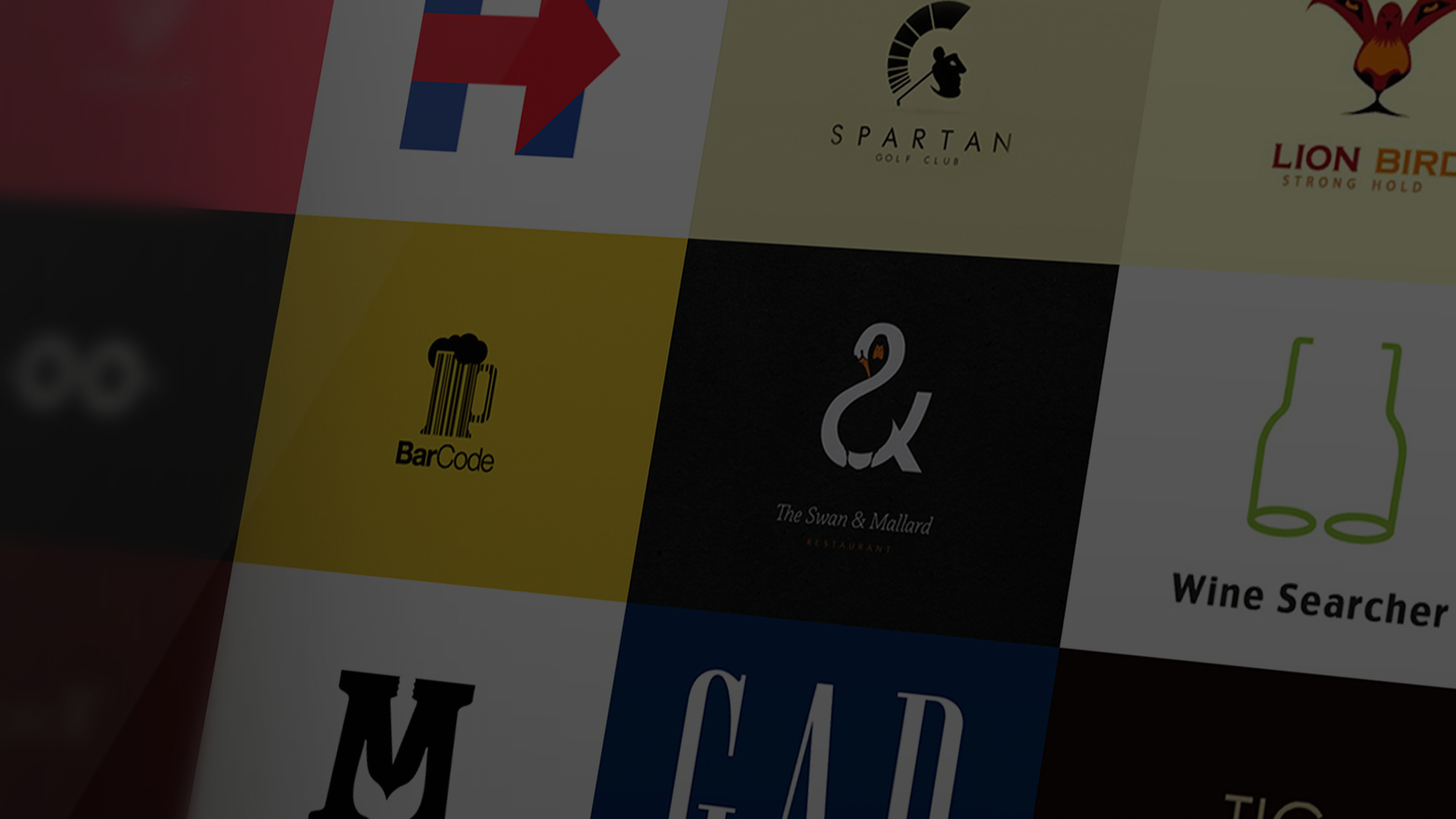 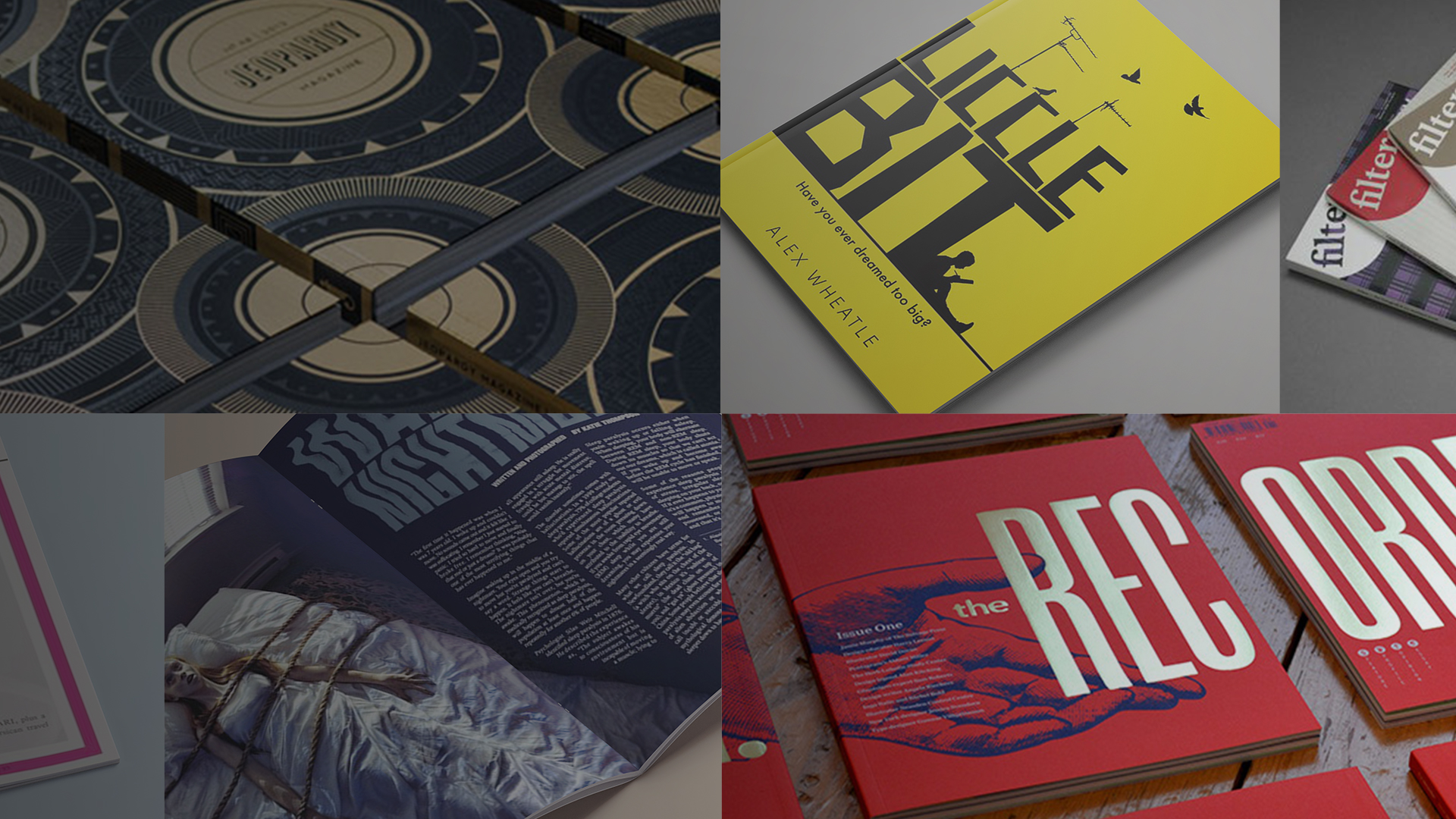 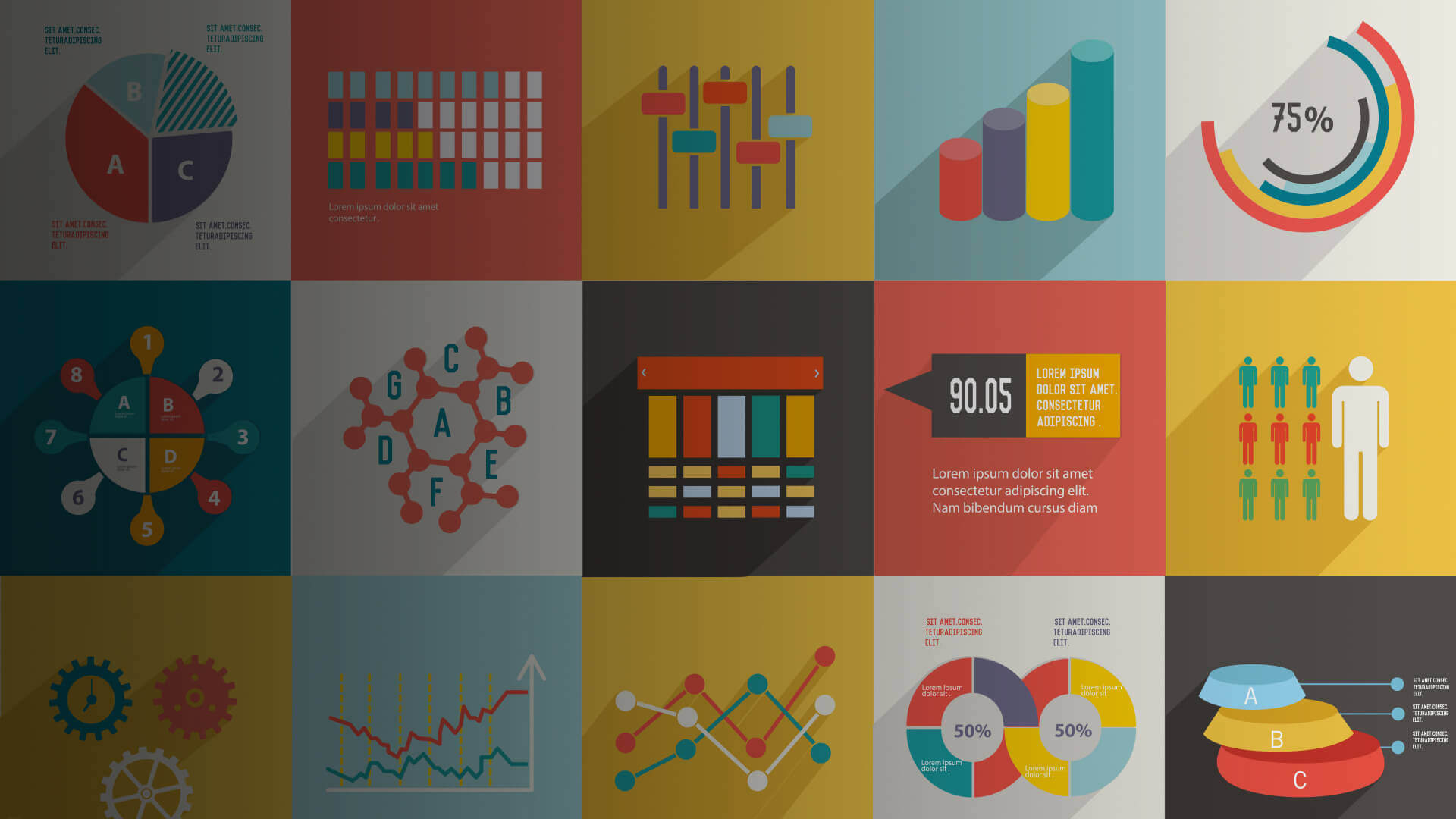