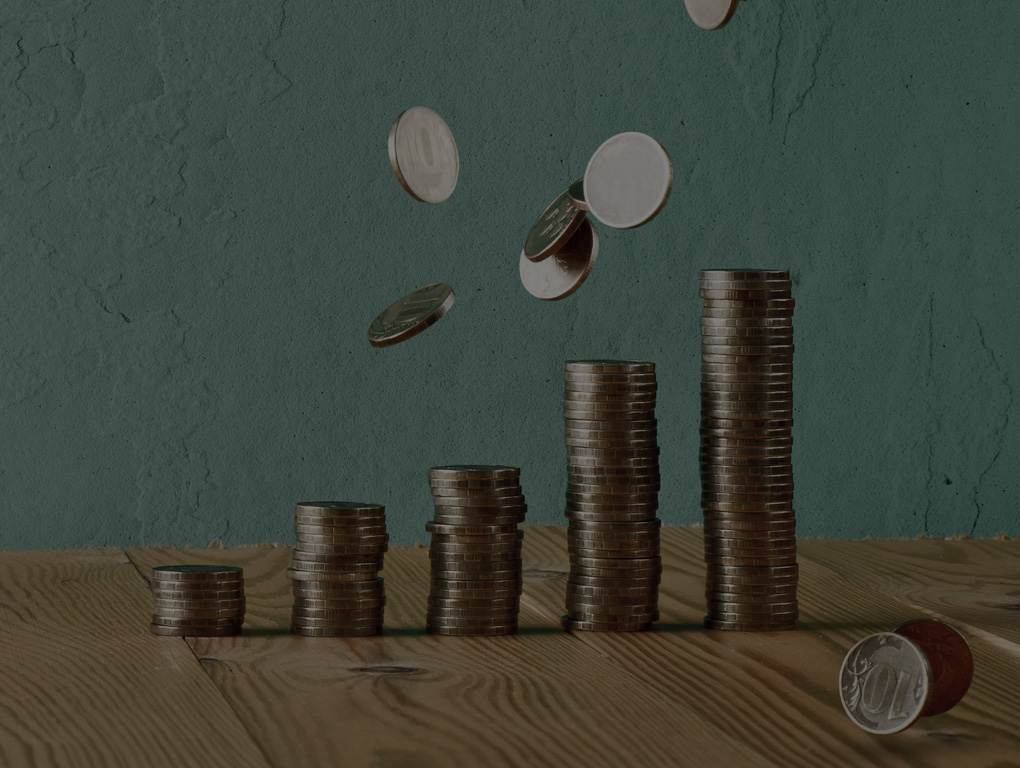 In an uncertain political climate, creatives are looking apprehensively to see how the instability of the UK economy will impact their careers. Things seemed on the up towards the end of 2016. Weekly UK earnings rose 2% in the biggest salary increase in almost twenty years, whilst the CBI reported that 42% of companies have projected a growth in their workforce in 2017 (in comparison to only 13% who predicted a drop). The introduction of the National Living Wage has certainly driven a rise in earnings, with Korn Ferry Hay Group measuring the increase as up to 3% in real income for workers.

But what does this mean for Graphic Designers? How has the creative industry been affected by these shifts? Are Graphic Designers enjoying the pay rises that the CBI claim to be in effect or do design studios reside in the 13% of businesses polled by the CBI who might have to cut back on employment costs? A survey conducted by Design Week showed that 64.9% of Graphic Designers who are considering changing jobs are doing so for financial reasons. Unrest over salary is increasing, especially those working in-house. Only 1% of designer’s think that they’ll be in the same job in ten years’ time, is this because designers feel repeatedly underpaid?

We took a look at the average salary of Graphic Designers at all stages of their career over the past few years to find out if designers salaries are really on the rise.

We collated the average annual salary of Graphic Designers at all stages their career since 2013 to look at the most recent fluctuations in salary. The graph below tracks the average earnings of Junior, Mid-Range and Senior Designers all the way through to Creative Director over the past three years. 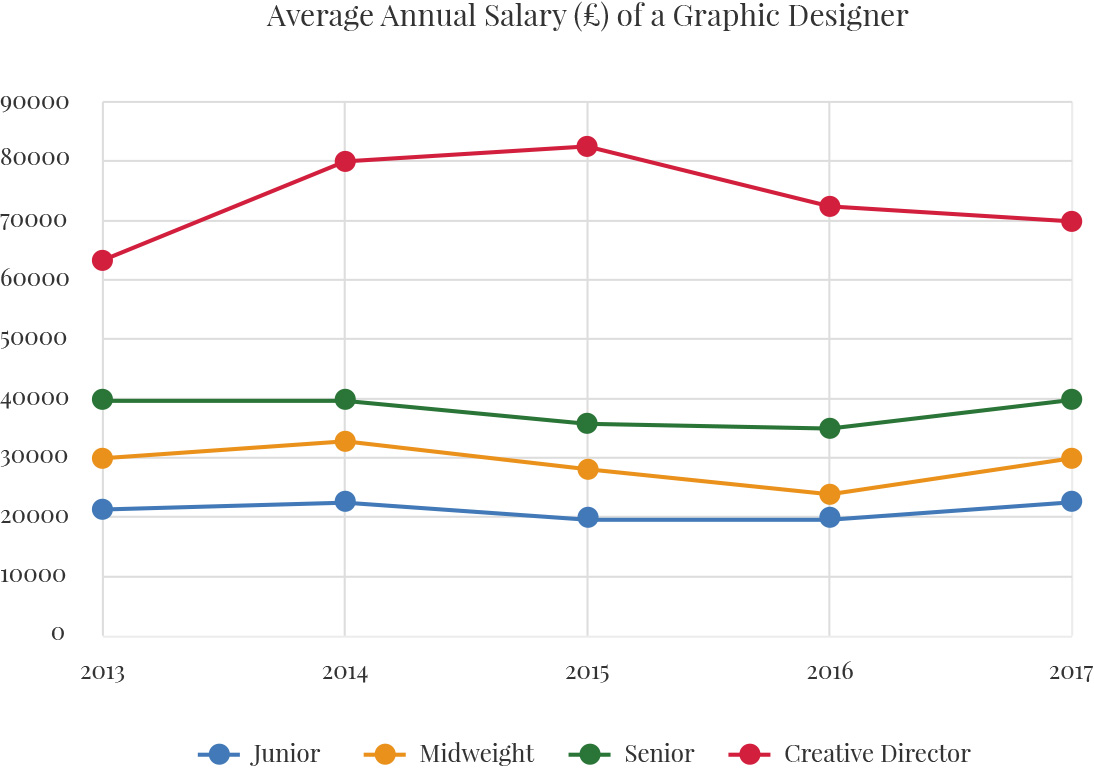 The projected annual salary for an entry-level Graphic designer is currently at £22,000, a 4.65% increase to that of 2013. This is positive news for those just taking their first steps on the career ladder and showcases the value employers are putting in hiring the next generation of designers. The digital world is booming, and it seems businesses are looking to young Graphic Designers to help with the influx of work coming in. This increase could also suggest that employers are becoming more willing to invest in less experienced designers; a promising move in an industry where vast criticism is placed over “Free Work”. In a survey conducted by The Freelancer’s Club, 54% of creative freelancer’s said they took unpaid jobs just to gain exposure for their name and work, whilst 46% worked for free to gain industry experience. However, this recent rise in the salaries of Junior Graphic Designers could well signify a step away from young creatives being forced to take unpaid jobs merely to gain experience.

Salaries for those with 2 years + experience, however, have seen a much flatter progression in recent years. In 2013 the average earnings were measured at £30,000, which is the same as the forecast for 2017. There was a slight rise in 2014 with average salaries reaching a high of £32,000, yet over the past two years, this has decreased by just over 6%.

This decrease could be explained by employers becoming more and more cautious over the number of annual pay rises given to staff. Pay rises are historically given as an incentive to employees and an annual reward for hard work. “A once-a-year payment schedule is too infrequent to change some’s work ethic” the Independent claimed last year. “Workers also complain that hearing about their flaws once a year gives them no chance to respond and change behaviours”. Companies have realised that reviewing worker’s pay each year in an annual performance review is not only a bad way to judge performance, but is a rigid and ineffective way to inspire progression. Although in the Independent, business owners seemed hazy on how they were replacing annual pay increases.

The introduction of the National Living Wage in 2016 has further made employers wary about dishing out pay rises since wage pressures have increased across the board. Designers who are a few years into employment and are employed by design studios could well be losing out on the pay rises they would have otherwise received pre-2015.

A similar pattern emerges once we glance into the annual average wages of Senior Graphic Designers. In 2015 we see a whopping 10% drop in earnings, which interestingly picks back up to £40,000 in Adrem’s predicted earnings for 2017. Again, the recent uncertain political and economic climate could explain the drop last year, yet 2017 again offers an optimistic outlook for Senior Designers who are aiming for new heights in their careers.

Do the salaries of graphic designers vary from place to place? The answer is a resounding yes, with London unsurprisingly securing the top spot for high earners in the design industry. Those residing in the big smoke can enjoy a UK leading annual average of £41,324, completely outperforming the rest of the country. The South East and East Midlands nab second and third place, offering an average of £32,795 and £30,599 respectively.

Graphic Designer’s in Northern Ireland earn, on average, the lowest in the UK with £21,818, with the North East and West Midlands also both under the £25,000 mark. Here is the breakdown of the average annual salary of designers from all areas of the country. 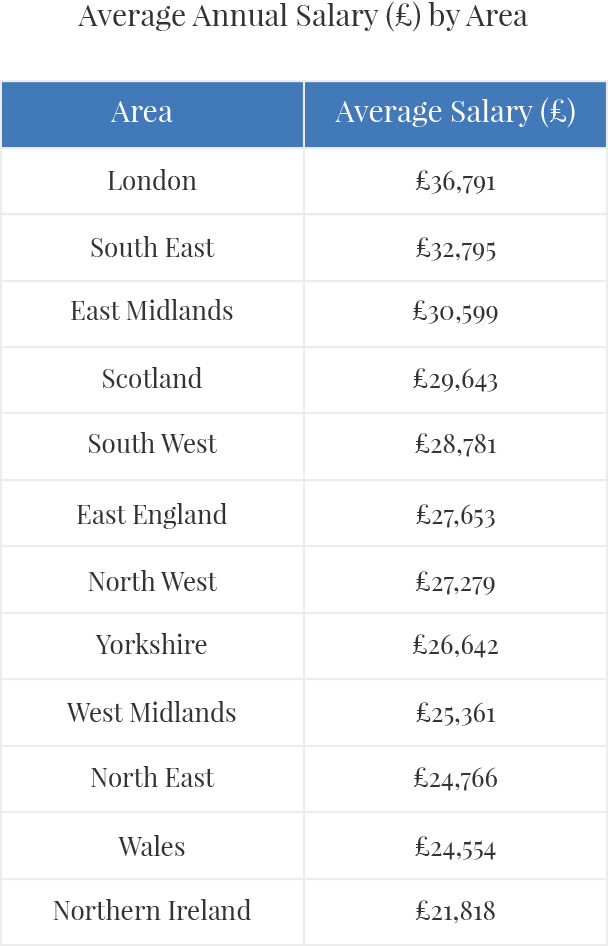 Big cities such as London, Leeds and Manchester have been and always will be hotspots for Graphic Designers in terms of job opportunities and salary progression. These heavyweights are often the breeding ground of large design studios and tech businesses who require designers, however, they are certainly not the be all and end all. The East Midlands and Scotland also offer competitive salaries, with smaller towns and cities still providing attractive salaries.

The highest salaries for Graphic Designers, however, don’t present themselves in the UK. According to Design Week’s survey, designers working their magic abroad earn, on average, 12.32% more than home birds. £41,324 is the average salary for a designer abroad; an enticing figure for any Graphic Designer. Indeed, according to the US Bureau of Labour, the mean annual wage for a designer across the pond is $46,900 (£38,607), whilst in Australia the average sits at the top half of the UK scale, earning an average of $49,909 (£30,425).

Self-employed Graphic Designers face another obstacle on the salary front. On average, Freelancers have worked 31 days unpaid over the past two years, meaning 45% of them found themselves without income to cover work costs, and 40% unable to cover basic living expenses. The uncertainty of your next project and reliability on clients means that freelancer’s salaries aren’t as fixed or reliable as those employed by a design studio or in-house.

Yet despite the ambiguity that self-employed people face, reports have shown that Freelance Graphic Designers actually earn more than those who are employed! £34,659 was the recorded average in 2014, with Senior Designer’s charging up to £330 per day for their services. Pricing strategies will vary from designer to designer, and how you price your freelance work will vastly affect your income. “Clients don’t care if it takes you 20 minutes or 20 hours to complete a project” claims Freelance Designer Jake Jorgovan, and playing around with your pricing can help you earn more income in less time. He started charging his clients based on the value of each project, which proved successful both for his income, work-life balance and to his clients. “When you charge based on the project, you are tying the price of the project to the client’s end result. The end result is all that the client cares about.”

Jake is an example of the shifting attitudes to design being seen by businesses, large and small. The impact of design on brand identity and user experience is being recognised more and more as businesses fight against their competition and it seems business owners are willing to pay more for expert Freelancer’s to help shape their identity.

As across most industries, Graphic Designers are noticing a gender pay gap. Men can earn up to 17% more than women with similar levels of experience and seniority. Last year men averaged at £33,433 whilst their women counterparts only came in at £30,733 across the board. According to the National Statistics Office, the UK average gender pay gap is 9.4%, female designers are being much harder than their counterparts in other industries. However, this has dropped 0.2% since 2015, meaning that female designers are grasping a stronger foothold on the salary ladder in recent years.

So on average, are designer’s salaries increasing? If we take into account designers with different experience, seniority, industry and employment type, the answer is… yes, but mainly for younger designers in junior roles. The average salary for Graphic Designers in 2011 came in at £33,500, whilst Creative Review polled the average salary at £33,443 in 2015, a small but notable drop. However, the figures from the chart do forecast an uplift in salaries in 2017 and beyond, with a much more positive outlook for young designers which will hopefully leak into the bank balances of those further up the career ladder as the economy recuperates! 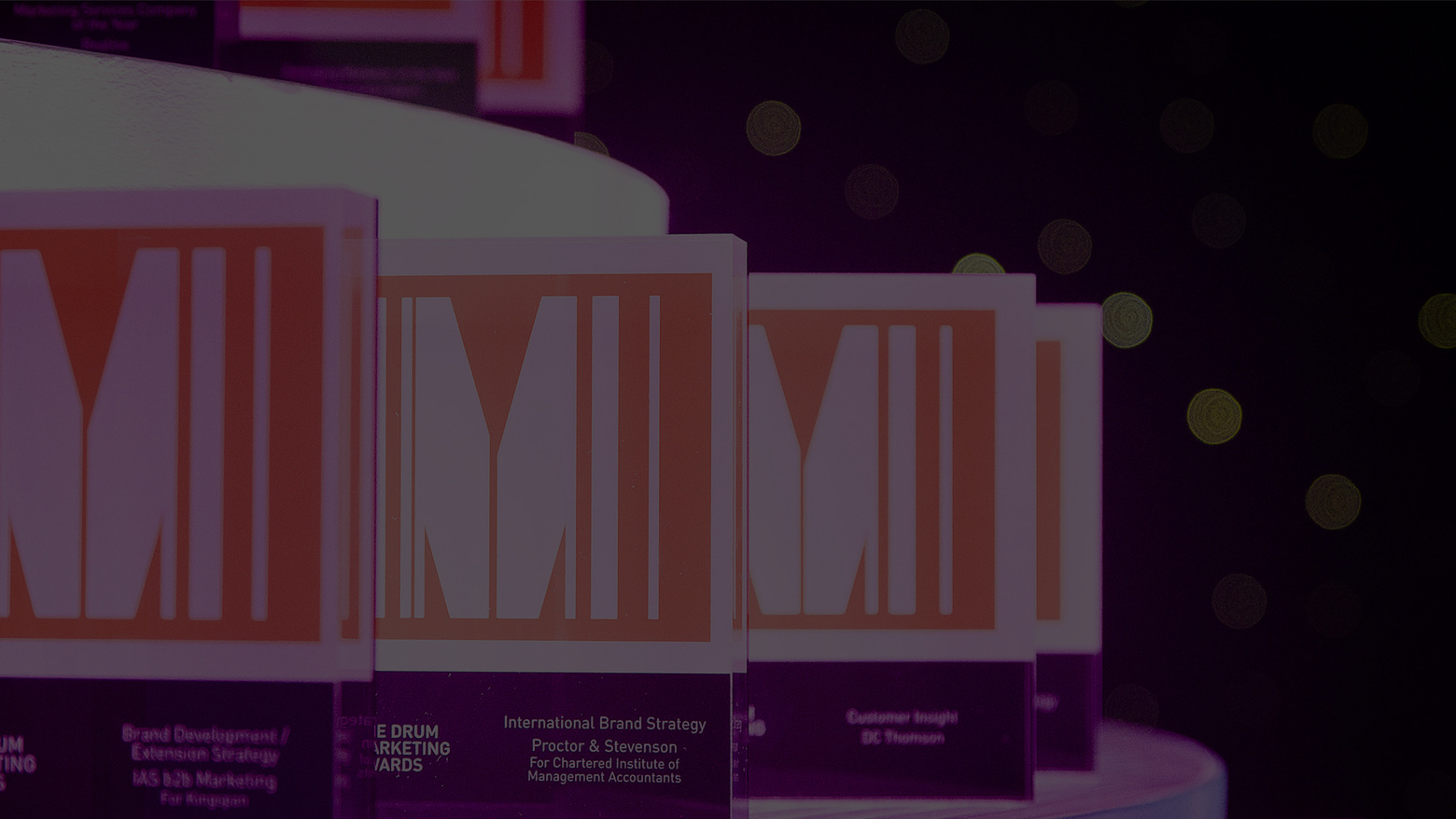